I discovered Bastille’s Oblivion sometime last week, or was it the other week; it feels like I have known it forever.
I am at the point where I love the song enough to play it for an entire day but haven’t crossed to the part where I google the lyrics because the only thing worse than having a song on replay is fighting the temptation to ‘sing’ along which never ends well for anyone in the vicinity. Yup! I used to be one of those people that were put in the choir for numbers. All I had to do was open my mouth and pretend to sing but that never bothered me; I was in the picture after all and when we won the set piece, I knew it was because of my sacrifice and willingness to learn words to the exact t even knowing that I would never voice them. Also the music teachers ALWAYS knew who exactly was ‘flatting’ and called you out in a very loud shout, it definitely wasn’t worth it so I was happy lip-syncing.

My biggest fear, when I find a song I love, is waking up one day and either not feeling the emotions I know I should when I listen to it or having to remember to play it. It’s terrifying, moving on like that; which means that every month I will have a different answer to the ‘what is your favorite song’ question thus making this the dumbest fear in history.
So the most I can hope for is not to get too attached to a song so that I don’t have to jump up screaming, ‘that’s my jaaaam’ five times in one hour (for three hours); because it does not look good anyone. Unless it’s after 3am because then no one will remember but if they do and that’s the only thing people can remember about a long night out, the gods were with you so you can’t help but be grateful. 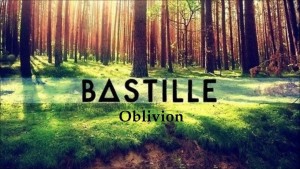 You ever listened to a song and felt it see through you and break down all the walls, and all that bull-sneeze? No, Oblivion is not like for me. I’m an open book so there’s no need for songs to see through me which no makes no sense whatsoever if you think about it; someone has guarded themselves against people with all types of tricks up their sleeves, with weapons of massive persuasion like a Javas Chicken salad and fancy coffee (2 sugars please), and new shoes or more like anything new and not succumbed yet you believe that they will listen to a song and throw all their resolve out the window because the song has spoken to them. Me thinks not but don’t take my word for it.

The ’Are you going to age with grace?’ line was the first to catch my attention in this song and I had one of those ‘Coz ya have a choice in how ya age?’ shock faces but the more I listened to it, the more it made sense although not the kind Bastille was probably hoping for.

Last week, a friend told me that if they had a chance to introduce me to Bikozulu they wouldn’t because I would ‘kubanja’ him posts and may be force him to write to me very long emails on topics of my choosing and some other things I would rather not mention in public. I don’t know what leverage my friend thinks I have or how persistent they think I am; I honestly don’t know where the miscommunication happened but I am quite sure if I were to meet Bikozulu, his life would not be in danger. Of any sort.
I did think about it though, and promised myself that I will gracefully enjoy Bikozulu’s two pieces of writing per week and even when there is one or none (What a nightmare!!), that I will remain as calm as Bastille sounds in this beautiful song.

And if all that fails, I’ll hope to find the oblivion Bastille sings about and may be then will I truly be free of this madness.