I spent my senior six vacation away from Kampala; a relative gave me one look, took pity upon me and hired me at a fair wage rate without the hustle and bustle that people speak of when they work for relatives.
To date, that is one of the best times of my life. It helps that the Ugandan shilling had great purchasing power back then so everything I wanted, I got. It’s not just about the money though (insert hysterical laughter); that year changed a lot for me, opened my eyes in ways that I wouldn’t have seen had I stayed in this big city.

Naturally if there is a home in a town you are moving to, it is expected that you will stay there. No negotiations, no hesitations. Back then I didn’t have a problem with this, the Pearl of today though has A LOT to say on the subject.
As is the case with most people that set up roots in such towns, my relative owned an establishment with a pool table. To date I am not quite sure what it was; a duuka, a restaurant, a bar… Let’s call it a one stop shop. She decided to turn it into a strictly katogo place, genius if you ask me.

Most evenings after work, she’d invite me for a night out at her joint and of course being the ‘boss’’ relative came with a bit of attention which I used to my advantage. For one, I could play as much pool as I wanted without worrying about parting with that green coin and being a beginner I can’t imagine how that might have quickly run through my hard earned money.
Secondly in establishments where one is merely a passer – by, people were never too happy about playing with a girl and my skill or lack thereof did NOT help my situation at all.
This was my blessing in disguise and I was lucky to get the in house table attendant to help me figure out a thing or two. I am obviously no professional but I do know how to arrange the balls and I am told I hold the cue like a professional. That’s gotta count for something, right?

Even though my heart skips a beat with excitement whenever I see a pool table, I tend to walk in the opposite direction to save everyone the ordeal which is what it becomes; I have been through it enough times that I have become immune to it.
Yesterday, I couldn’t stay away so as I held that cue I figured it couldn’t be worse than anything I had been through in the past. I couldn’t have been more wrong, hi Murphy.
You know those guys that pot one ball after another, three times? Sigh, I hate those chaps. Because I was playing in the turn of a person who had won the previous round, I had to break. My break is average at best, scatters the balls enough to not have you running to the little girl’s room to weep your soul out but not enough to actually pot a single ball.
This chap potted three balls before I got a chance to play again and all I could think was, ‘Dear Lord, please don’t let me lose with seven balls’. A few shots here and there, with me looking around for the best escape route as I wiped my sweaty palms down my lovely skirt I had somehow managed to clear all my balls and set a perfect black for my opponent.
Mentally tapping my back for having made it that far, I watched in utter disbelief as he did NOT pot the black. I have been known to fail the easiest of shots because of kibamo and I would be damned before I let it get in my way again.
I potted that black and the shock in the chap’s eyes is all the proof I needed to know that he didn’t intentionally throw the game. 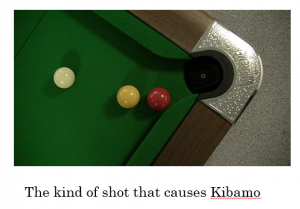 Little victories but sweet all the same. Speaking of little things, I moved to the BIG .com. In case you hadn’t noticed. The tech guy assured me that he redirected the link or connected them or something like that so I didn’t have to mention it but I couldn’t take that risk.
So Yaaaaay!