Africell who bought out Orange late last year look like they are back if their press ads are anything to go by. Also their billboards are accumulating a day at a time. Because the other telecoms have been running similar ads over periods of time, this leaves me with a lot of time to look at Africell ads every time I see them because the odds that they are new are high.
In today’s Red Pepper, Africell advertised the Alcatel Pixi 3 smartphone and I simply had to check out more information about it. 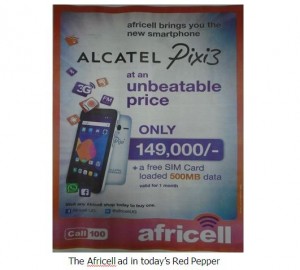 I am no expert on devices but I do not think that a phone that was announced in January and released in March counts as new in September.
2.    ‘…unbeatable price’
By definition;

This is the first communication I have seen about the Alcatel Pixi 3 which has me thinking what ‘unbeatable price’ entails exactly.
Is it a case of ‘how low can you go?’ whereby if another company sells it at a lower price, they will continue lowering the price so that it goes down in history that Africell sold the Alcatel Pixi 3 at an unbeatable price?
Is it a challenge to other companies to show them who is bawss (*in a Russian accent rubbing hands* Step onto the battle field but make sure you say your goodbyes before you do <I’m sorry, let’s blame Allegiance, the series>)?
This of course creates the possibility that other companies will step up to the challenge determined to wipe the smug off their face because who turns down a chance to prove the competition wrong?
I’d definitely like to see that!
Lovemarks: The fairy-tale of brands
Views: 0